Today we’re launching the first of a series of Represent fundraising campaigns in support of indie film by genre.  Say what?  Yup, you heard us. 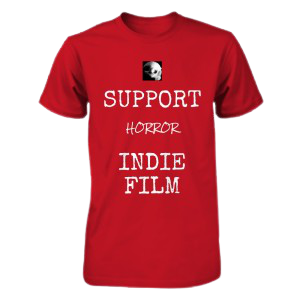 We keep stumbling across the most amazing, well-written, fabulous, quirky, cheeky, ghoulish, bloody, disgusting independent film productions from teams of extremely talented individuals from all over the world and we just can’t help enough of them.  We’re talking crews who should have already hit the big time, but they’re being held back by lack of funding.  It’s just not fair.  These artists deserve the opportunity to take their shot and we aim to help them do it.

For our first Represent fundraising campaign, we’re starting off in support of horror film – a genre near and dear to our cold, undead hearts.  We love it and we know you do, too.  Won’t you help us support these films waiting to be made?  Profits from the sale of all tees will go into our fundraising pool to support more solid and deserving independent productions.
Shirts will be created and shipped at the conclusion of the fundraising campaign and we can’t print until the orders are in, so there’s no time to lose!  Hit the link today and get your order in for a great tee and know that your contribution will help the indie film community.
Support Horror Indie Film Today!
All the shirts in the series will feature the Bony Fiddle logo and the target genre.  As we go along, once the initial campaigns run for a couple of weeks, we’ll work to add more colours and some different styles for a bit of variety.  After the initial fundraising for each genre, we also hope to run them in perpetuity in the background.  If you love them, you’ll be able to come back and create more orders whenever you like knowing all your contributions will continue to help out some great crews who need our support to get their productions off the ground.
Follow Bony Fiddle on Facebook for updates or other news about this particular campaign or any further fundraising in the indie film genre series we’ll be running over the next few months.
filmfund raisinggenrehorrorindie filmmerchandiseshopshoppingt-shirtsToronto filmtoronto film production