Ben Clifford plays Casey in the one act comedy A Man of Two Minds, and brings his own crazy energy to the character. His audition blew us away and it was an easy decision to have him fill the roll of Casey. Working with him has been nothing but a pleasure, as he is always on time and enjoys making us laugh.

He has been involved in theatre in some form or another since he was twelve. What started as a way to “avoid doing real school work” evolved firmly into the passion that drives his life. He secretly wanted to be an accountant, but his parents told him “there’s no money in business, get a stable job in the arts”.
“Really looking forward to playing Casey in A Man of Two Minds. Casey, for me, combines the haphazard traits of youth and a natural inclination to story-tell.”
In 2007, he studied Drama and Theatre in Trinity College Dublin. After graduating, he continued on to write and perform sketch comedy around Ireland and at the Edinburgh Fringe. While in Toronto, Canada, Ben has acted both in theatre and in film, building experience as the lead of two features and numerous plays. He also maintains his Irish connection by working in the Irish theatre scene in Canada. Ben plans to return to his residence in Dublin, Ireland once the Bony Fiddle theatre production of Man of Two Minds has closed.

Tweet
//
Our film production company is in evolution. Have we mentioned that before?
It feels like staying in a hotel while our house is being renovated, but that doesn’t mean we can’t make it comfortable. Have you checked out the improved Live site that only used to house the theatre component? Not quite what we have in mind for the entire film production company in the end, but more out of understanding everyone needs access to tools and information while we’re still working on the main site.

Through some group effort and creative thinking, it’s not half bad if we do say so ourselves.
You may or may not have seen the old site, but trust me, this one is vastly improved, and we’re glad no one has to look at the other one any more. There has been a collective exhale on our part.

Continued evolution and development will bring us to the new permanent home for the Bony Fiddle film production company site proper, but that vision is large (yeah, they all are), so is going to take some time.  In the meantime, all components are temporarily housed under our theatre “Live” division.  We didn’t want anyone to suffer any longer.  It’s just a whole lot easier on the eyes.  You’re welcome!
We’ve got a little bit of everything from theatre to zombie rentals to props to ticket sales to the blog and even a gallery of some shots from rehearsals, so a bit of this and that. Along with some logical navigation, you should be able to find everything you need. We hope!
Stay a while and browse.
Peruse the cast and crew pages, check out the calendar, read a little about how we got here, brush up on our current projects and maybe buy a ticket or two.

Theatre – Auditions for A Man of Two Minds/Lost Refuge

Tweet
//
Of the three days of auditions for A Man of Two Minds/Lost Refuge, the very first thrill was reaching the building. Seriously, no kidding. 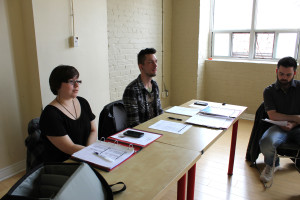 Film, yeah, okay we’ve done that before, but auditions for a theatrical production? Nope, first time, so this was a whole other experience.
The location was empty and it was a nice venue for a casting call besides, so the initial impression was along the lines of “Oooh, it’s all ours? Cool!”. Okay, and the room was called the “bad ass” studio. I mean, come on!
What can we say? The little things along the path of creation still excite us.

Our trusty staff photographer, Monte Shen, was on hand documenting auditionees, so we didn’t have to try to remember to snap pics with phones. Always appreciated. Readings were played against Sam and Blair with help supplied by Keith Beegan and Ryan Bower (who wrote the music and sound effects for the show).
Marina Pratt, who would become our Assistant Stage Manager, came to audition for a role. Due to her enthusiasm for stage management, we didn’t cast her. Okay, and maybe we, ah, convinced her otherwise, because it suited our nefarious purposes. 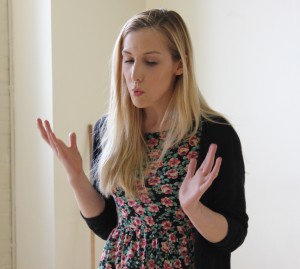 Instead of having her in the show, we put her obvious talents to our best advantage as ASM alongside Sam. Anyone who can keep pace next to Samantha’s considerable organisational skills, I give full props to. Can I say I’m glad Sam’s not my boss? You go, Marina!
Over the three days of auditions, multiple people who had confirmed ahead of time didn’t make an appearance which was a bit of a disappointment. On the plus side, despite a poor turnout on the third day, of those who came, that was when we found our “Rebecca” in Samantha Levine, ending the day on a positive note.
The highlight of the auditions? Hands down, that was zombie audition day. There’s nothing quite like making a bunch of grown-ups shuffle around a room moaning and growling. Fantastic! We ended up with eight highly talented individuals who have now become our zombie horde for “Lost Refuge”. Couldn’t see it happen to a nicer group. They’re a great bunch and I think we may see them make a reappearance once the performance wraps. Can’t let a good zombie horde go to waste. That would just be wrong.

With auditions now complete, we dive right into our first days of rehearsal. See you on the other side of those on September 11th for opening night of A Man of Two Minds and Lost Refuge at the Tranzac Club here in Toronto.
Peace!
JD 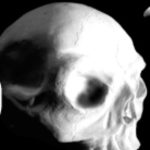